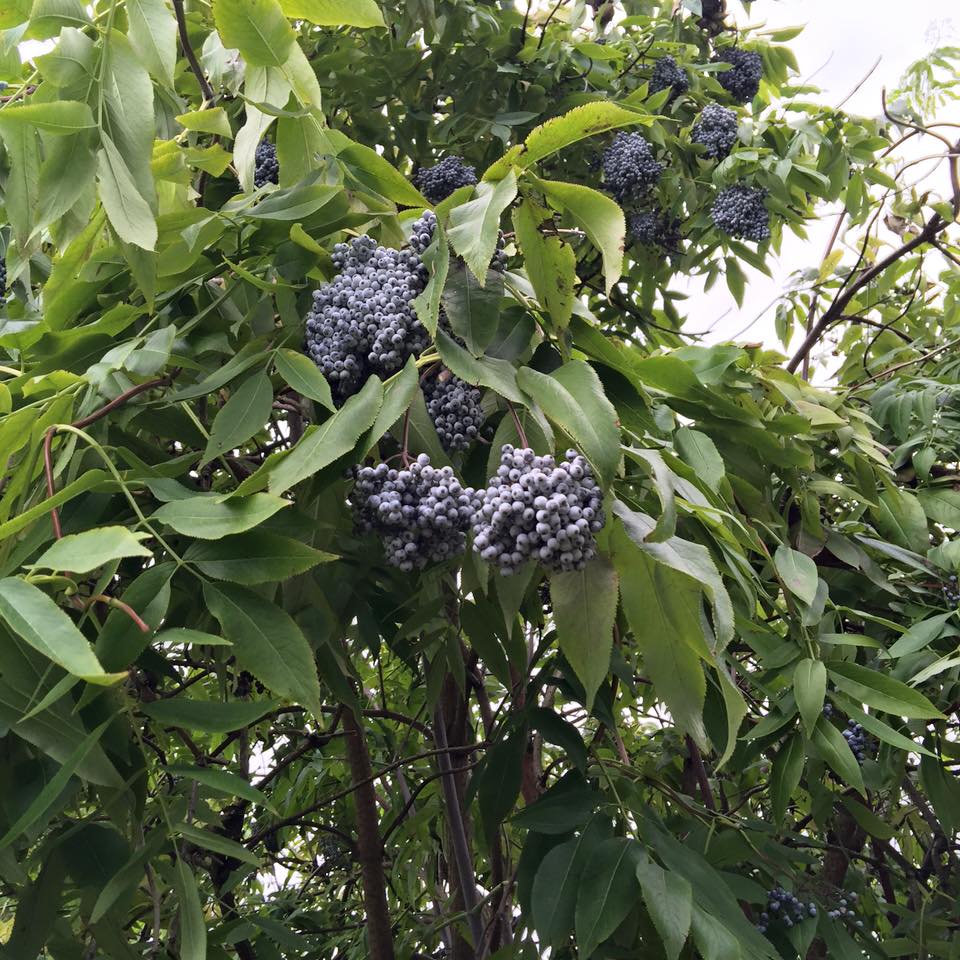 The Truth About Elderberries

Elderberries are powerful medicine to have on hand yet there is much controversy surrounding the elder. To heat or not to heat? Are elderberries poisonous? These are the questions for which I do my best to give thoughtful and well researched answers. 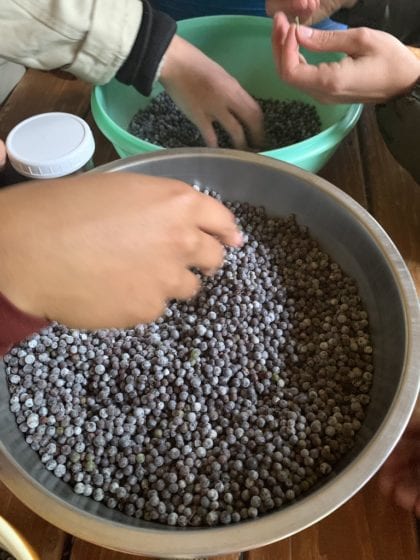 Fill a jar 1/2 of the way up the jar with fresh squished berries.

Tightly cover the jar with a plastic lid, or with a piece of parchment paper between the metal lid and the vinegar if making an oxymel, and put it on a dish as there may be some leakage. Let macerate in your fridge (to prevent fermentation) for a month, then strain all plant material including the seeds.

A half to a whole teaspoon in a cup of warm water several times a day is all that is needed to provide relief. As elixirs and oxymels take a month to macerate fully, you might want to get on this right away!

If you choose to make a straight up alcohol tincture, fill your jar halfway with the mashed berries, then fill to the top of the jar with 100 proof alcohol to extract and preserve all alkaloids and antioxidants. It may be necessary to refrigerate the alcohol tinctures while they’re macerating to prevent fermentation. Be sure to put a label on your jars/bottles.

To make a living elderberry honey syrup with fresh berries, use the same method above, filling a jar halfway up with squished berries then top off the jar with local raw honey. Every day, turn it upside down – right side up first day, upside down the second day, right side up third day, etc for the first 2 weeks. After 2 weeks, keep the jar in the fridge to keep from fermenting. The syrup is ready in 3-4 weeks. Strain and enjoy on pancakes, in tea, on toast…the possibilities are endless and guess what? Polyphenols, Vit C,  and prebiotics are intact!

You, your family, and your friends will be very happy when you provide them with herbal medicine that works effectively! 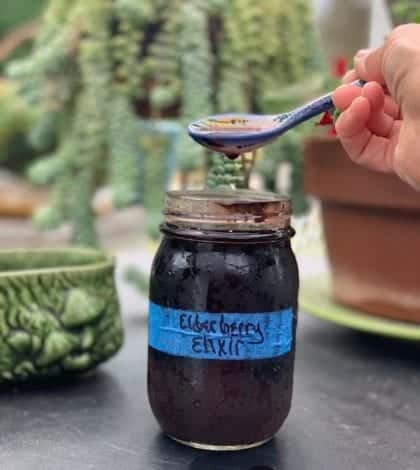 Let’s look into the medicine in elderberries. Elder is probably the most well-known antiviral herb on the market at present. It can assist in reducing inflammation in the sinuses and lungs to relieve congestion, eliminate metabolic waste, stimulate sweating to remediate fevers, and reduce flu and cold symptoms. Elderberries contain shikimic acid, an intermediary in the production of Tamiflu, an anti-flu pharmaceutical. While commercial production of Tamiflu uses the shikimic acid in star anise, elderberries also contain this valuable constituent. Cool beans, elderberry!

Phenolic compounds in plants are secondary metabolites. While some claim they are not inherently necessary for a cell’s survival, they play key roles in the protection against pathogens, saline stress, heavy metal stress, UVA and UVB radiation. Antioxidants, terpenoids, and alkaloids/glucosinolates are 3 of the principal kinds of secondary metabolites synthesized in plants. Shikimic acid is part of the secondary metabolism in the actions of plant vitality.

Elderberries contain a variety of polyphenols. Polyphenols are a class of flavonoids, AKA antioxidants. In plants, polyphenols role is to give fruits and veggies their color, contribute to bitter taste, astringency, aroma, and the stability of the plant.  In us, polyphenols help to slow down or prevent the progression of diseases such as diabetes and Alzheimer’s. Additionally, they fight free radicals, kill viruses, fungi, and bacteria, reduce the appearance of aging, reduce inflammation, protect the cardiovascular system, support normal blood sugar levels and blood pressure, promote brain health, protect the skin against UV rays.

Polyphenols help to positively influence the health of the gut ecology. Beneficial bacteria thrive in the gut with the addition of polyphenols, while bad bacteria are negatively impacted. What we eat directly influences the health of the structure of our gut and the demographics (the population and particular bacterial groups within it) of the bacteria in our intestines.

When processing elderberries, care must be taken to ensure that the medicinal components are kept intact. While immune supporting magnesium, potassium, niacin, viburnic and shikimic acids and other health supporting constituents and nutrients in elderberries can withstand heating and drying, the ascorbic acid, anthocyanins, and many other flavonoids (AKA antioxidants) may not. Heat and drying, whether it is stove top heat, or drying in dehydrators, microwaves (!), or any other heat source can degrade to a degree or destroy many the flavonoids in plants. (1).

10% medicinal loss is not a huge reduction in medicine and is not as significant a loss as would be had by boiling the berries. My point is that people will boil the heck out of the berries for much longer than 10 minutes. I’ve crawled all over the internet looking at elderberry syrup recipes. Long boiling/simmering. Using immune depressing sugar to make the syrup. No bueno. Just because a zillion people copy and paste a recipe, it doesn’t mean the info is golden. Something to think about, hey?

There is much controversy concerning the lectins in elderberries. Some will point to an occurrence back in the 80s where several people were “poisoned” by drinking a large quantity of fresh elderberry juice that included pressed leaves and branches. The symptoms were severe gastric upset and diarrhea. It appears that lectins were the culprit, as “Arterial blood gases were normal for all eight, as were serum cyanide levels”. See this article from the CDC regarding this event. Lectins in plants resist degradation in the stomach, meaning they don’t break down in the stomach. This causes the digestive system to try and get rid of them as quickly as possible. That doesn’t mean poisoning, that means holy crap, point the way to the bathroom! Not everyone is as strongly affected by the lectins as others may be. Think about this: plants need protection from predators. They can’t run away or call the police or a doctor, so they devise ways to protect them including bitter tasting polyphenols, poisonous glycosides, prickles and the like. Genius!!! For more information on lectins and heating elderberries, please read this study.

Personally, I use only fresh elderberries in my remedy making. Why heat the elderberries to lose even a small percentage of its medicine? I honor the plant giving itself to me by utilizing as much of the medicine as possible. Additionally, I microdose, so never have to deal with the possible lectin issue. I take only a teaspoon of an elixir, tincture or oxymel per dose and space each dose out a few hours in between.

Furthermore, be wary of those who will try to monetize our fears by claiming elderberry to be the be-all-end-all herb. It is not. We must not put all our eggs in one elderberry basket and think this particular herb is the only answer. Use common sense around cleanliness, avoiding contact with those affected by viruses, and using other immune and respiratory systems supportive herbs such as yarrow, lomatium, arrowleaf balsamroot, rosemary, oregano, and elecampane to name just a few. Fire cider is helpful, as are raw garlic and onions. Try paper thin slices of raw onion and garlic on nut butter toast.

Being a wildcrafter and steward of the land on which I harvest and teach, I profess that we must utilize the most effective menstrua and processes to ensure we get the greatest amount of medicine out of the plants we harvest in respect that we took plant material from nature that those who actually live on that land – animals, other plants, etc, – also utilize for their survival.

All this to say, sure, dried elderberries cooked into syrup may still be somewhat effective against influenza viruses, however, if processed lightly using fresh berries, the full complement of the medicine is available. In this climate of concern about contracting the coronavirus – and the influenzas A and B and colds that are still being passed around – people are looking for definitive answers. I would say go ahead and use the dried berries if that’s all you have, but steep in hot water for a short amount of time instead of boiling. It’s kind of a “we’ll take what we can get” scenario.

To note: While plants do have the ability to produce constituents that kill certain viruses, fungi, and bacteria, we don’t know for certain that those constituents will definitively kill COVID-19 and subsequent strains. While this virus is being fully explored, there are still so many unknowns. Use critical thinking to make smart choices.

Well , there you have it. The truth about elderberries! Keep believing in herbal medicine – because it’s awesome – and be healthy! 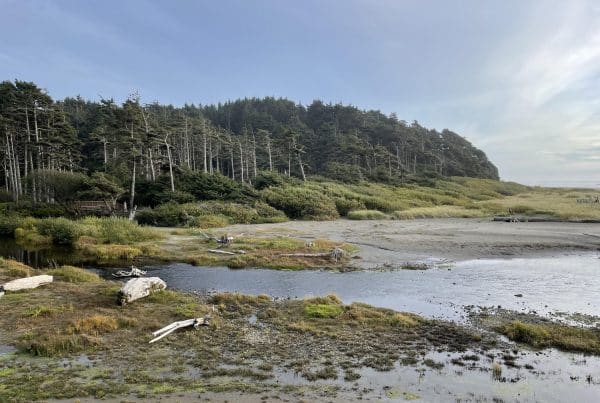 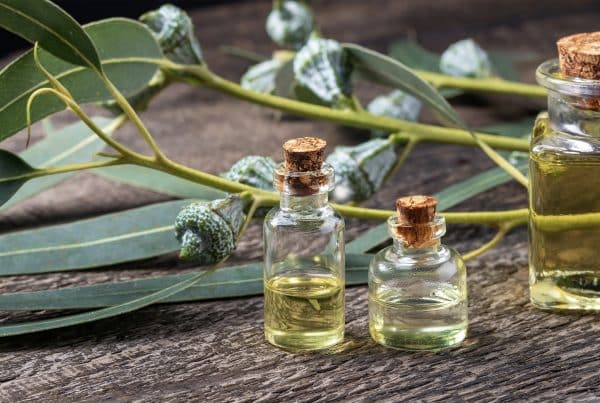 Introducing Wild and Beautiful…Naturally! a new book of herbal recipes

Redefine beauty with glowing skin from the inside out, and a touch of love! Wild and Beautiful gives you dozens of unique skin care recipes to cleanse, exfoliate, tone, and moisturize, with a bunch of bonus self-care recipes.

Sign up for our newsletter and get Suzanne Tabert’s free ebook on herbal Valentine’s recipes. Fill your life with love and “good scents”!
Sign up here!

© 2021 Cedar Mountain Herb School.      ✽      ❤ by web.ninja
Some links on this site may lead to direct sales or sales commissions for the site owners.